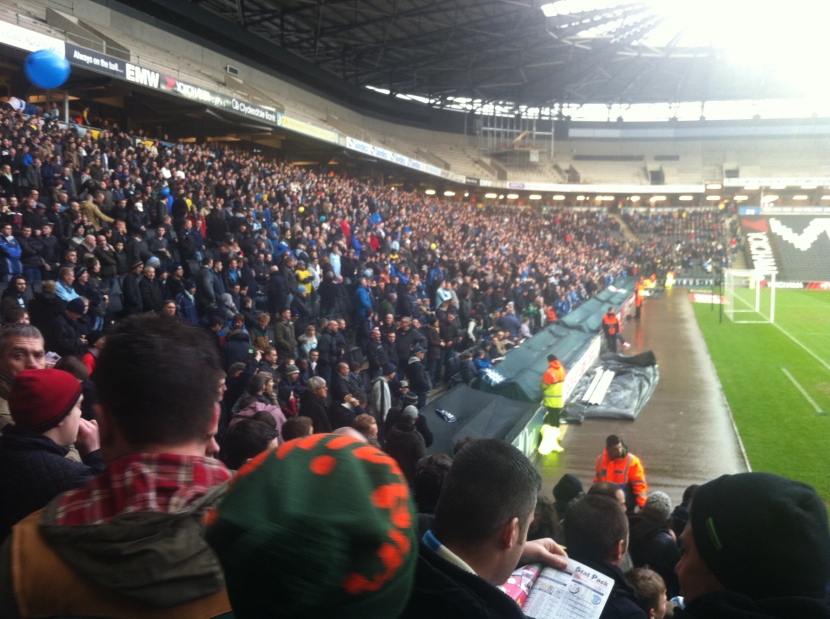 Last Saturday afternoon saw me take the trip down the M1 to see my first away game of the season. A last minute decision based on the performances over the past couple of months and the fact that it’s our second closest trip.

It goes without saying that the support was phenomenal and really did give me a sense of pride in the club and the fans, something I’ve missed when having a row of seats to myself in the South Stand of the Ricoh. There was the obligatory goading of the MK Dons fans, and in particular their non-existent ‘history’, the chant which really hit home to me was ‘We’re a proper football club’ sung briefly in the first half. Hearing that chant and seeing so many City fans so fervently enthusiastic for the team made me realise that whatever the outcome of our own ‘Fiscal Cliff’ involving ACL, SISU, Tim Fisher et al. the fire still burns brightly for CCFC.

The depressing fact of modern day football is that fans now have to care deeply for both the on-field and off-field activities of the club, more so than at any other time in my football knowledge. I believe that fans can tolerate only one of these not being run successfully and showing progress. In other words, the thing that made last season so depressing was the failure on the pitch combined with the absolute chaos off it (Dulieu, Seppala, Brody etc). Currently we have big problems and questions regarding our owners and our lack of ownership of the Ricoh, but to a degree we can take that with the team performing so well and the confidence we have in Mark Robins. Equally if we had owners we were all confident in and had managed to solve the Ricoh ownership conundrum, but were still showing patchy form on the pitch, we’d probably take that as reassuring for next season as long as we could stay up.

What will happen in the next few days and weeks regarding ACL is anyone’s guess, but however much bluster has come from both sides it’s clear that they both need each other to move forwards and have viable business models. My personal belief is that things will be sorted and a compromise struck, but the thing that has frustrated me the most has been SISU and the club’s lack of willingness to use an arbiter that the fans have confidence in, someone like Joe Elliott. ACL’s latest statement spoke of ‘Mayfair-based Hedge fund SISU’, a clear nod to the fact that they don’t feel they are dealing with Coventry City, they are dealing with a facade who are not acting fully in the best interests of Coventry City or indeed Coventry as a city.

Currently the fans don’t have confidence in either side, we’re forced to choose between our football club or our council, both of which we have a vested interest in. It’s like Hulk Hogan taking on the Ultimate Warrior, there is no obvious bad guy so you’re left to just watch the spectacle unfold. If either the council or the club had asked someone like Joe Elliott (I appreciate this is complicated by the Hoffman issue) or another neutral personality, an ex-MP or indeed someone like Paul Fletcher who currently has no axe to grind, they could have worked with both sides to thrash out a deal and given the fans confidence that there was a ‘safe’ pair of hands working on the deal.

Anyway, back to Saturday’s game. It was a great tactical performance from a settled side. The combination of grit, energy and guile from Jennings, Moussa and Fleck won the game for us. For so many years Coventry have never looked comfortable in possession away from home, we’re closed down quickly and the opposition get on top of us. Robins has changed this by doing two things, firstly implementing a solid, settled back four with energy at full-back, secondly having a five man midfield who know their role and are comfortable under pressure. Jennings to win the ball, Moussa and Fleck (Bailey) to retain possession and then feed the wide players, the supporting full-backs or look for a ball in behind. To a degree this is why I’m confident we can continue our good form even if David McGoldrick doesn’t stay, yes, he’s been fantastic in terms of finishing, but the formation and set-up Robins has implemented means any striker should be able to fit in. With Leon Clarke we may go more direct, but that should offer more opportunities for Backer, Sheffers and Moussa to pick up the second ball or go past Clarke, in contrast to now where McGoldrick is looking to run in behind himself.

In conclusion, as we reach the end of 2012, we’re in the strongest position on the pitch in the past ten years, yes, a division lower than we should be but I’d argue our current squad and manager is the best we’ve had since the Mickey Adams days. If we can sort the Ricoh out sooner rather than later and keep the momentum going then you never know, 2013 might deliver some Sky Blue Smiles.